We’ve nearly reached the end of February, and with it the end of my patience regarding winter. A blizzard warning here today, and my reaction to that is simply:

I’m ready for warmth and color and sunshine. I want to ride my bike. I want to go outside without first putting on 17 layers of clothing. I want to mow my lawn and smell fresh grass and see flowers blooming in my garden. I want to see Clover, the little bunny who lives under the big cedar in the backyard and know that she’s alright.

I’m sick to death of gray and white and day after day without a hint of sunshine. I’m sick of boots and gloves and having to brush off my car in the parking lot at work before I can return home. I’m sick of shoveling.

Before I could do laundry this morning, I had to wade through thigh-high snow to get to the place where the dryer vent on the side of the house was buried and dig out a trough to unblock it. When I came in I had to put my jeans and socks in the dryer cuz they were soaked through.

Throughout the entire 20-minute or so ordeal, I was thinking, “WHY am I doing this?” Other people do not live like this.

The reality is, though, that we’re nowhere near the end of winter here in Michigan, and Mother Nature couldn’t care less about how I feel. She’s just doing her thing – same as every year – and she’s not ready to give up the cold and snow just yet.

So…I have to change my thinking. I can’t change how I feel about the weather, but I can change how I think about it. I wish I could say there were some things I appreciate about winter – that would go a long way toward thinking about it differently, but there isn’t even one thing I can think of that I like about it.

Let’s see…nope. I got nothin’.

So I’ll just have to work at acceptance, as I do with so many things in my life over which I have no power, and remind myself that it could be a lot worse. Yes, we have snow – so much snow – but we don’t have hurricanes or tornadoes. Also, most of the deadly little creatures on the planet – snakes and insects and other nasty critters – can’t live in the cold, so I have to worry less about meeting my death by inadvertently stepping on one of them than someone who is basking in sunshine and warmth right now.

So not all bad. I’m not likely to lose my house in the blizzard today – power maybe, but that will be temporary, if at all, and if I don’t freeze to death in my house without power, I’m golden!

How am I doing? A stretch, I know. Acceptance of the things I don’t like but can’t change is a toughie for me. Endurance is hard. I want change, and I want it now! I saw a quote yesterday that said, “You’re not a tree – MOVE!”

Sounds good, doesn’t it? And sometimes possible. Not for me, though, cuz the old lady is welded to this place and all its misery. Ah, the old lady – another thing I can’t change or control.

My challenge: Acceptance of life as it presents itself to me in the moment. Endurance ongoing.

Yes, that’s it. Just keep going. Spring has never failed to come. Until it manifests itself in the outer world, I’ll have to nurture it within. Light and new growth.

“In the midst of winter, I found there was, within me, an invincible summer.” – Albert Camus 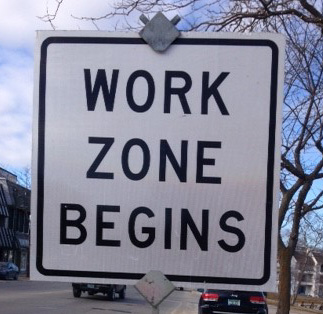 I’ve had two situations today in which keeping my mouth shut was the wise choice. It was NOT my first inclination, but that’s exactly what I did in both instances, thank goodness. Apparently I’ve learned a couple of lessons: “living to fight another day” and “picking your battles.”

So this is growth, right? My temper and my mouth got me in such trouble when I was younger. Over and over. I lost friends, jobs, relationships – the list goes on and on. Just about every time I opened my mouth in anger I was still yelling as I or someone else walked out the door. I felt justified in my anger and I told myself it didn’t matter. Picture Jack Nicholson: “You can’t handle the truth!” Not my problem. I was righteous, baby!

It did matter, though, and I have learned from those mistakes. That’s a good thing. Learning “the hard way,” as they say, is painful, but effective. I would like to reach a point at which I learn without pain, but I’m not there yet. Not even close, I’d say. I’d also like to say that I’m always able to keep my mouth shut, but I’m not there yet, either. I’m a work in progress.

Mostly, though, I’ve learned not to tick off people from whom I want or need something. That may seem fairly evident to you, but it has not always been that obvious to me. Duh. Turns out, people are not inclined to help you or give you what you want if you just yelled (or are still yelling) at them. Huh.

So, the second part of that puzzle is what to do with the anger that I’m not unleashing on someone, and I’m getting pretty good at that, too. I walk, ride my bike, write, sing, or play a game until I calm down. And I talk to myself. I talk to that angry part of myself who is so desperate to have her say. And we make a plan to make it be okay – to right whatever wrong has made me so hot under the collar – down the road. Not now…later.

Just because I’m not yelling, doesn’t mean I’ve given up. That’s the key. That’s what took so long to figure out. In the past I had two modes when something made me mad: get angry and lash out, or lay down and die. Angry as hell or depressed. Nothing in between. The concept of delayed gratification was foreign to me.

I get it now, though. As in all things, moderation has turned out to be the better way. As often as I can, I take the middle way: think about a considered response to whatever has set me off, and figure out the best way to deliver that response. Not in the heat of the moment, but sometime later when I’m calm enough to think it all through and make sense of exactly what made me angry and what I want to do or say about it, if anything.

Yeah, sometimes after I’ve calmed down, I don’t do anything. I work on letting it go, cuz I’ve figured out that no good would be served by responding. Imagine that! Thinking before you act or speak, and then CHOOSING not to do either. Wow. So simple, and yet so, so, very hard.

One of the situations today begs a response, and I’ll figure out the best way to respond when I’m calmer and I’ve thought about the situation some more. Fortunately, I have the time to do that. I have to try to be sure I know what I want out of the situation – turns out what I think I want initially is not always really it – and figure out what the other party wants, so I can present my case so that we both win.

The other situation I have to let go if I want to keep my job, and I do. So I have to work on reconciling myself to doing what I’m being asked to do, even though it’s not fair, it’s not right, and it sucks big time all the way around. No matter how I look it, I lose. Except I win, because ultimately what I want is to keep my job. So lips sealed tightly, fingers stopped from hitting “Reply” and typing what I’d really like to say, but can’t.

Growth, right? Maturity. Man, it’s hard. I feel like I won today, though. I still have my job, all of my friends, and my dignity.

Most importantly, I will live to fight another day.